Will You Be Among the High Rollers? 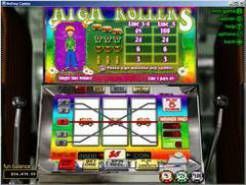 Play Now
If you lived through the Seventies, the title of this slot might trigger a few memories as soon as you see it. The game screen itself will do, and since this game is pretty cool and bright in its design, it fits in well. But even if you never lived through this decade, High Rollers could still be the slot for you. Hailing from Real Time Gaming, it is more unusual than the traditional casino slot machine appearance you would see.

This game has three reels and five paylines in play.

It’s not bad – you have options between five cents and five dollars per coin, with five coins playable in total. This means you can get a $25 top bet at most – quite small compared with other games. You can also play from as little as a quarter.

No, you won’t find a bonus level included here.

As you can see, this Seventies-inspired game is pretty nice to try, especially if you are not a fan of the single-payline versions of three-reel slots. It still has the usual slot machine appearance, so if you like the idea of feeling as though you’re sitting in a casino, you’ll appreciate that. The symbols are clearly represented on the pay table above, and the good thing is there are very few of them involved in the game. That makes it seem like it would be easier to get winning combinations… but of course you’ll have to try the actual game to see if this is the case. You might be surprised at the results you get when you play it for real.
Play Now