Are You in With a Shot at Finding the Pharaoh’s Gold? 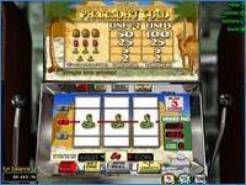 Play Now
The time of the Pharaohs is long gone, of course, but that doesn’t mean they haven’t turned up on the reels of various slot games in recent times. Here they have appeared in this classic game from Real Time Gaming, so you know it is worth finding out more.

This game has three reels, so you’d be forgiven for thinking it would only have one payline. You’d be wrong in this case though, as there are three in all. The reels are slightly longer than you might expect, giving rise to three paylines one above the other. Does Pharaoh’s Gold allow decent bet amounts? You can play a single coin on each of the three paylines. The smallest-valued coin you can use is a quarter, but you can raise the stakes to $5 per coin as well.

A variety of Egyptian-themed symbols will appear on the reels, but they do not all appear on the pay table. The only ones that could trigger a win would be the asp (a green-colored snake), a scarab beetle and the Pharaoh. You can win a prize for getting two asps on a line, but three will win a bigger prize. The top prize is won for three Pharaohs on a payline. It is important to be aware of the value of a three-coin bet here. Two Pharaohs will win 50 coins on the first or second line. However, if you get three on the third payline, you will win the progressive jackpot included with the game. Finally, the eye symbol is a wild and stands in for everything else, so that can make it a little easier to trigger a winning combination.

No, this game is as basic as it gets in this respect, so no bonus is provided.

If you like the look and feel of a traditional slot game, you will probably enjoy this one. It doesn’t have any really exciting features, but at least you get a couple extra lines to play with. Also, the progressive jackpot could make it worth playing all three lines, assuming it has amassed enough to make it worth your while playing a bigger bet.
Play Now 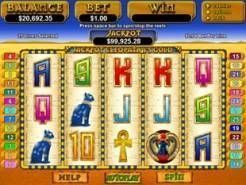 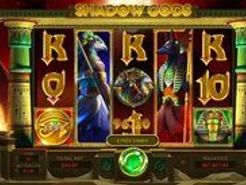 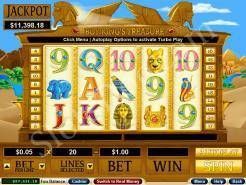 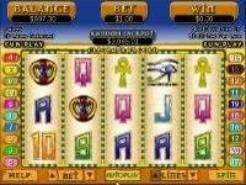